Click on the WhatsApp logo below to send a personalized message
×

The Roman villa of Rio Verde is located in Marbella, on the left side of the Rio Verde (hence its characteristic name). It was a very important place in the past, due to its proximity to the sea: from there the raw material used for salting fish was extracted (a very important activity during Roman times). Moreover, it was also a Roman villa: in other words, it was like what we know today as a country house.

It has a courtyard that could be accessed from the inside before entering the villa. If you want to know a little more about the Roman villa Marbella, we recommend that you read on.

Visit the Roman Villa in Marbella

The Rio verde Roman Villa was discovered during the 1960s by Fernando Alcalá Martín and Carlos Posac Mon. The area of the villa that has been explored offers us incredible views: you can appreciate what was once a residential complex characterized by a wide peristyle with a unique rectangular shape. Along it we can find what would be the rooms.

The peristyle advances through a portico in the shape of II. We find a gallery that has been paved with geometric decoration, in addition to a very interesting border in which we find represented some elements such as fish, others, pots, pitchers, glasses …

Of all the rooms we have commented on, the one that attracts the most attention is the one that has been called ‘A’: it has a square floor plan, with a mosaic in which we can depict birds, plants and craters. The most special thing about this mosaic is what we will find in the central area: it is here that Medusa’s head is located, which is a symbol that is related to good luck to navigation. 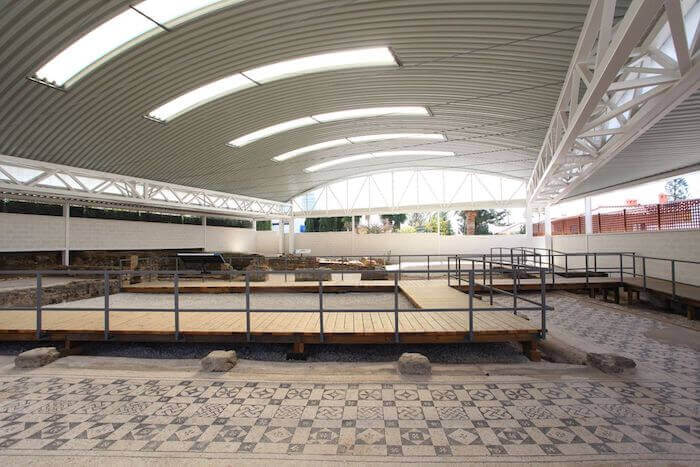 When can I visit Rio Verde Roman Villa?

If you want to visit the Rio Verde Roman Villa, then you must know the timetables. Entrance is free, but the timetable is very strict:

A report dating from 2007 warned that the site was not fit for visiting, and the reason is that it was exposed to deteriorating environmental and anthropogenic conditions. However, from that year onwards, the different public administrations initiated different projects with the aim of improving the facilities and thus conditioning them to be able to open them to the public.

You can stay in a hotel on your visit to Rio Verde Marbella and get to know other just as important or more important monuments in the city. Hotel Lima is a hotel in the centre of Marbella just a few meteres from the beach.